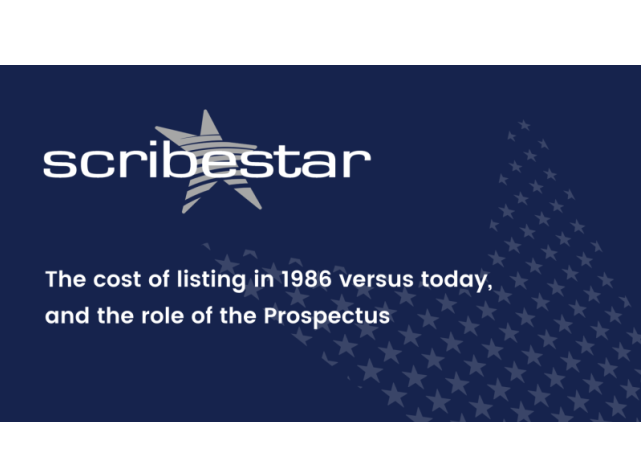 “London Stock Exchange published our article on the cost of listing in 1986 versus today. You can read it below and also access it here on the LSE webpage

How much did it cost to list and raise money on the London Stock Exchange in 1986, and how does that cost compare to 2021? A possible answer can be found in two very interesting papers published 35 years apart.

The first is a Bank of England paper from December 1986 titled “New issue costs and methods in the UK equity market” [1]. The other is a comprehensive report on the primary and secondary equity markets in the European Union, commissioned by the European Commission and produced by Oxera Consulting LLP in November 2020 [2].

According to the Bank of England the average total cost of a new listing in London via a public offering was about 15.3% of amount raised (Table 1). Figures were calculated on a sample of 57 offers for sale between 1983 and 1986 – most of them under GBP 10m in 1986 money, or GBP 30m adjusted for inflation. 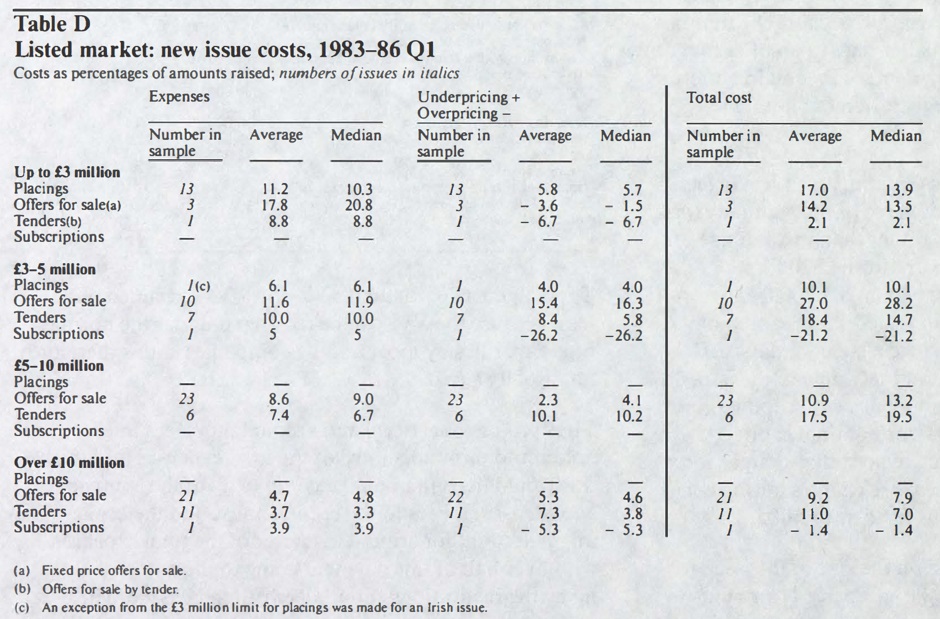 Table 1: Cost of listing as percentage of amount raised in 1986
Source: Bank of England

In 2020 Oxera estimated the financial cost of an IPO in an EU-domiciled venue (including London) to be in the region of 5% to 15% of gross proceeds,“…although this can be higher for those raising smaller sum”.

In percentage terms the listing costs are disproportionately higher for small and medium-sized enterprises (SME), making access to capital public markets for those companies more costly and potentially less appealing.

The pure direct costs of the listing exclude underpricing, and generally consist of fees paid to the underwriters/ bookrunners, accountants, lawyers, advisers, the listing venue, the regulators, but also service charges by PR firms, financial printers, and other providers of professional services. 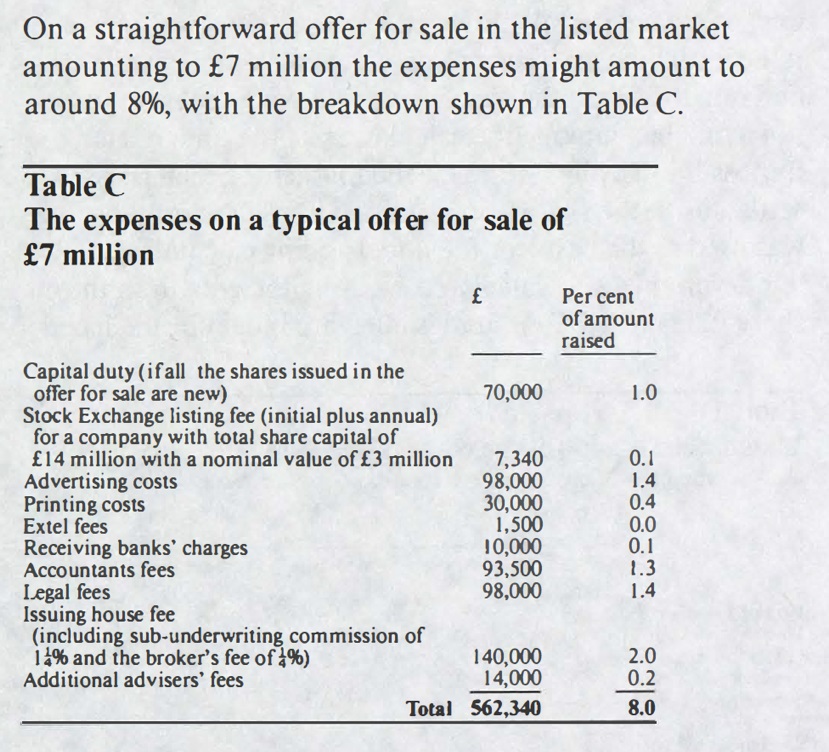 Some 35 years later Oxera estimates the same at 8%, based on an assumed gross deal value of €60m (Table 3). 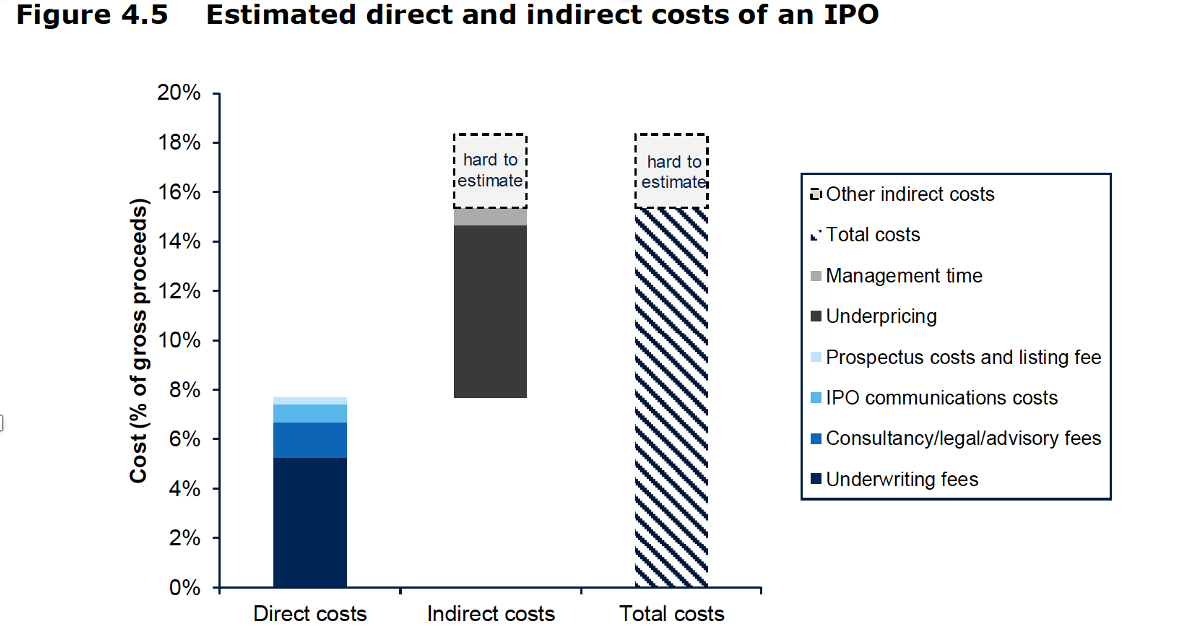 Looking at a more granular level, in their earlier analysis Oxera found the combined cost of legal expenses, accounting and auditing fees, advisory fees, printing, PR, and other accounted for approximately 3−6% of the funds raised for a typical issuer.

In the Bank of England example from 1986 the equivalent cost items come out at 4.7%, within the range of Oxera’s estimates 35 years later.

Cost of prospectus and how regulations affect it

Often, we hear that producing the prospectus is a costly, complex, and time-consuming process.

Back in 1986 as well as today the prospectus was the central disclosure document a company needed to prepare in order to list. Then as now, producing a prospectus is considered a costly, complex, and time-consuming process for issuers.

The Bank of England in 1986 comments that“…the preparation of the prospectus involves considerable work and cost in terms of accountancy and legal fees.” Years later Oxera further elaborates that the increased length and complexity of the prospectus documentation is part of what many issuers attribute to the high and growing cost of listing.

Though one will often hear that the size and complexity of a Prospectus is the product of growing regulatory requirements (and that the solution is in reducing the regulations and disclosure requirements for issuers), Oxera’s research offers an additional perspective. According to their conversations with issuers the reason for the increased size and complexity lies in the evolution of market practice (and risk averse legal advisers and senior management) rather than the regulatory requirements alone.

Both the Bank of England and the Oxera also conclude that smaller size of the issuance does not necessarily mean less disclosure, a shorter prospectus, or lower cost. In terms of fees for producing the prospectus, Bank of England concludes that this is depended on the complexity of the issue and not directly related to its size; whilst Oxera finds that prospectus length is not proportionate to market capitalisation.

The Oxera paper goes on to explain that although the number of document sections that form part of the EU Growth Prospectus has been reduced by new regulation compared to a normal prospectus, the number of elements included in each section of the prospectus has increased.

Looking at the figures and the persistence of issuer challenges in both the 1986 and 2020 reports it looks, at face value, not much has changed in the intervening 35 years.

Certainly not in terms of the direct costs and fee structures. With so many years of capital markets development and technological progress the stand-out question is obvious: how come we’re still in the same place?

In our experience, the rate of tech adoption in this particular nontrading or “admin” part of capital markets processes has been significantly slower than it has been on the trading side.

We’re determined to change this. We at ScribeStar believe that technology can lower the costs of listing while improving the level of compliance and making the overall process more enjoyable.

Our platform allows listing documentation and transaction management to be done much faster and more efficiently (according to our clients in 50% of the time – watch this video by the London Stock Exchange in the related content section.) 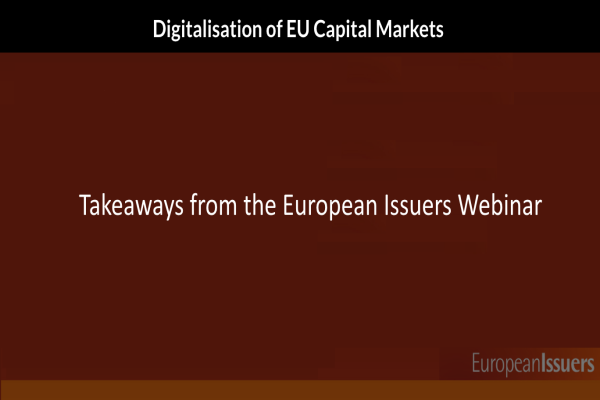 ScribeStar Co-Founder and Executive Chairman Adam Shaw participated today in the Europeanissuers webinar on the Digitalisation of EU Capital Markets to discuss technology and market trends in the capital markets space. He was joined by Peter Kerstens, Adviser on Technology and Innovation at DG FISMA, Friedrich Luithlen Global Head of Debt Capital Markets at DZ Bank, Hervé Labbé, CEO of NowCP, and  Robert Koller, the Executive Chairman of the european primary placement facility (eppf).

The event came at a time when Europe is making strong strides towards a Capital Markets Union, and the market is rapidly adjusting to accommodate COVID19 induced demands for quick and efficient access to capital and for new ways of remote capital markets operations. It was an exciting panel of technology providers, bankers, and policy makers, each with a unique perspective on the role of digitalisation  in this respect, and what the European capital market of the future looks like. Below are just some of our takeaways from the discussion.

The future looks bright, and there are many promising technology initiatives which will drive positive change. The only way forward is for the industry, technology providers, regulators and policy makers to work together. We enjoyed exactly such an experience in today’s panel. Many thanks to our panellist colleagues for the engaging discussion, all the participants for tuning in, and EuropeanIssuers for organising. We’re looking forward to the next one! 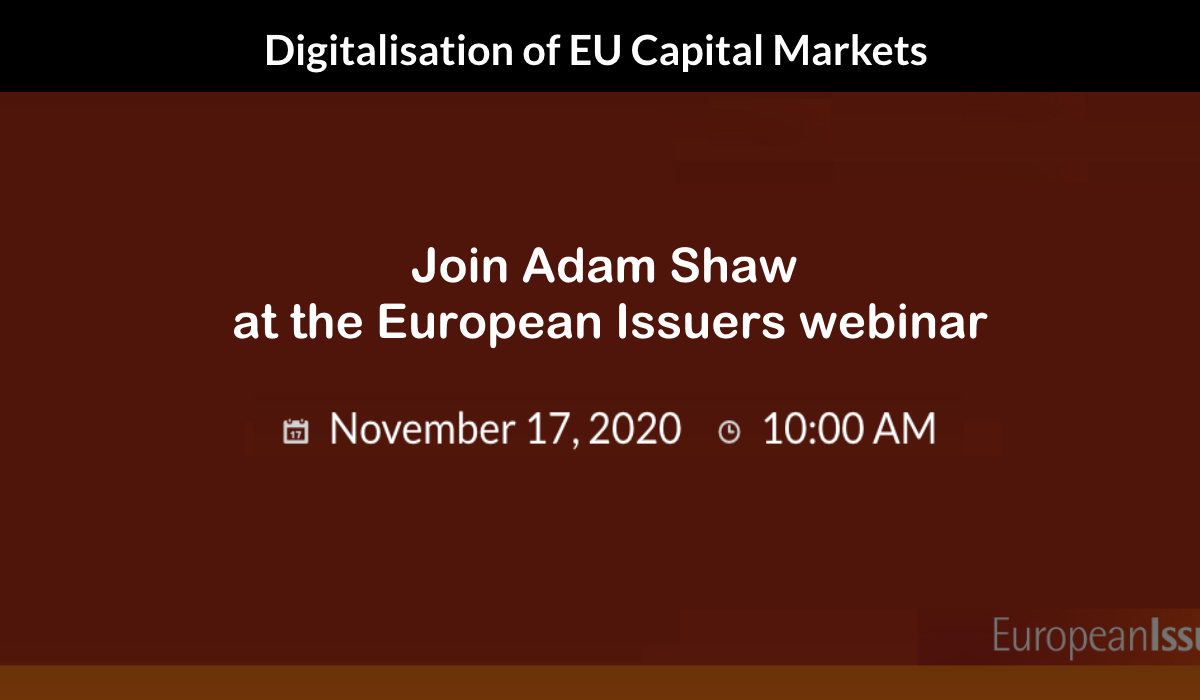 This Webinar is part of European Issuers Capital Markets Webinar Series Programme on key trends in the capital markets space, in partnership with NASDAQ and Euronext.

Join to learn what the European public markets can do to make raising capital easier, how the efforts around the Capital Markets Union will affect exchanges, issuers, and investors, and how technology can help tackle these challenges.

Do you have questions or comments you’d like us to address at the event? We’d love to hear from you at info@scribestar.com.

For some background reading on the topic, here is our take on the latest High Level Forum Report on the Capital Markets Union – https://www.lsegissuerservices.com/spark/scribestar-digitalisation-stock-exchanges 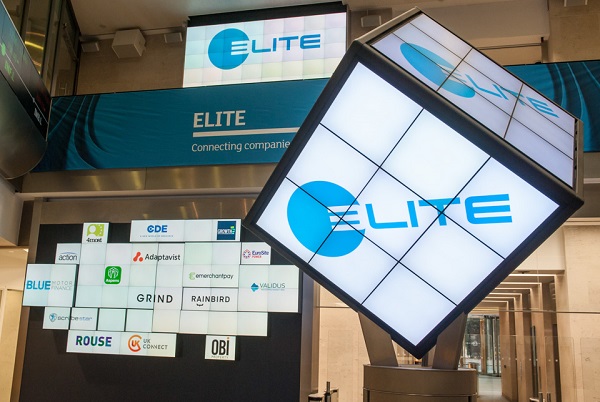 Scribestar look towards growth and investment in 2019 supported by LSEG’s ELITE programme.

London UK, Tuesday, 4th December 2018 – Scribestar, the London-based company focused on improving the efficiency of capital markets transactions through its online collaboration platform for document drafting, verification and publishing, is unveiling its latest plans for growth after successfully securing a place on the London Stock Exchange Group’s ELITE programme.

“We’re thrilled to have been selected to join such a prestigious global programme. As an organisation, we’re anticipating being able to draw on the expertise of all those involved to build further on our successes so far in delivering significant efficiency and productivity gains to law firms and their advisors in managing the drafting to publication of highly-complex documentation for capital market transactions.”

“We know our market proposition works – our client-base is proof of that – however what we now have is a unique opportunity to immerse the company in a wealth of experience, networking opportunities and access to funding options for future investment and expansion to help us really focus on our long-term goal of making Scribestar the de facto legal engine for any organisation involved in corporate fundraising activities.”

“I’m excited to present the latest group of UK companies to join ELITE, a clear demonstration of the country’s ability to grow great businesses. These companies drive innovation, employment, and create opportunities for us all.

“ELITE is committed to giving the British business stars of the future the very best chance to succeed, providing them with access to appropriate expertise and capital. It is a unique, strong community of the best and most dynamic entrepreneurs, advisers, investors and business school academics from the UK, Europe and around the world.”

About ELITE
ELITE is a full-service programme designed to help ambitious companies prepare and structure for the next stage of growth through the access to long term financing opportunities. It is a unique offering for scale-ups across Europe and beyond, providing a comprehensive training programme and extensive access to the business and financial community. The ELITE Funding platform, launched in 2017, will also help streamline the capital raising process for ELITE.   For further information about the London Stock Exchange Group’s ELITE programme, please visit the official website at https://www.lseg.com/elite 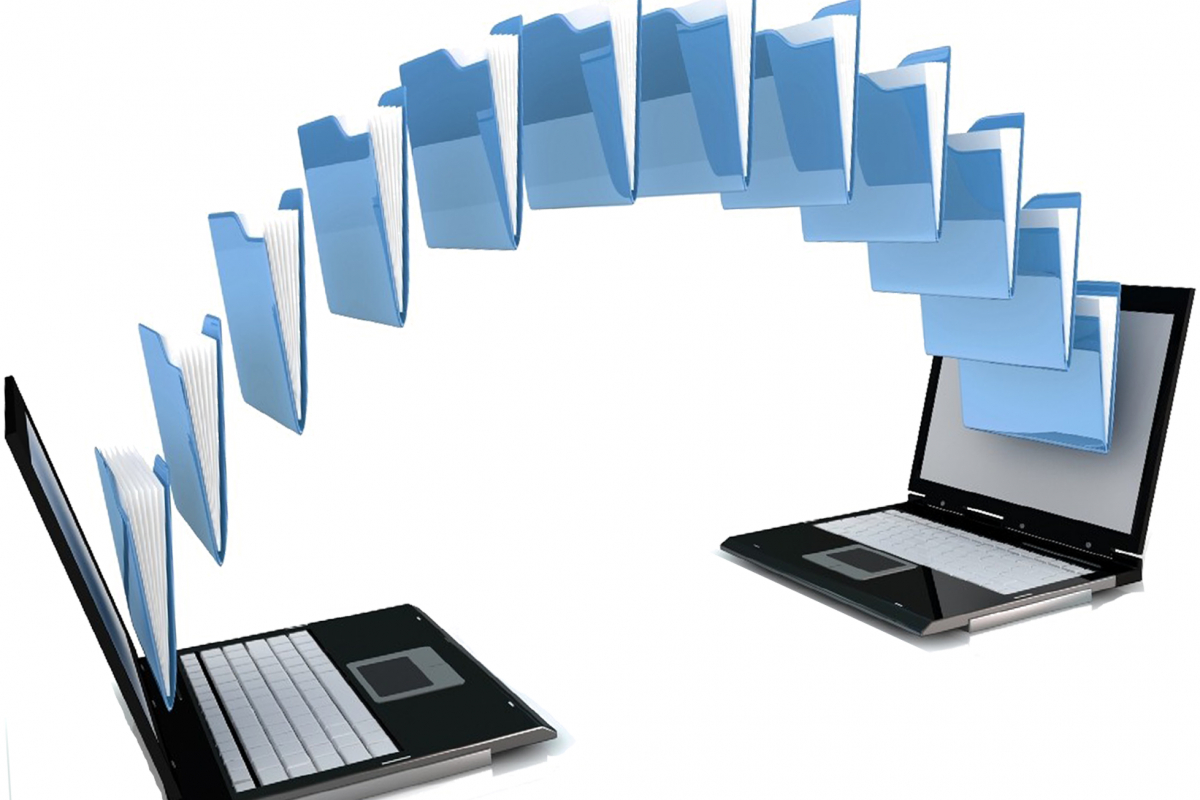 Scribestar is pleased to announce that their collaboration and workflow platform has been used for the preparation of the registration document for the proposed Aston Martin IPO.

Using the Scribestar platform, all authorised parties have a single, real-time view of the document for drafting, review and regulatory submissions, adding efficiency to key elements of the process.