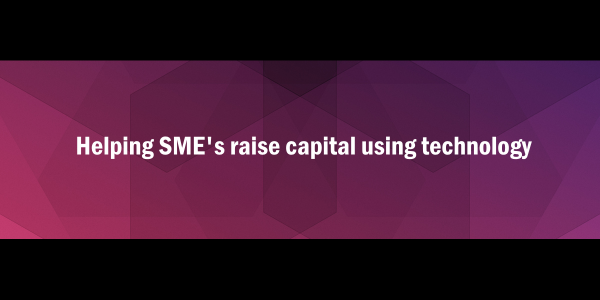 Despite the importance of Small and Medium Enterprises (SME’s) to the global economy, 2008’s global financial crisis forced a contraction in traditional sources of finance for SME’s, including Initial Public Offerings (IPOs) capital markets. Questionably, this contraction has not yet been fully addressed. It certainly created new financing avenues for SME’s largely using technology, such as Peer2Peer (P2P) lending, crowdfunding and digitisation offerings in the form of Initial Coin Offerings (ICOs) and Security Tokens (STOs). At the same time, the role of traditional public capital markets as a source of funds for SME’s has declined dramatically and the banks seem reluctant to provide the much-needed capital. How these traditional public markets and their regulators can make debt and equity capital attractively accessible to SME’s once again is yet to be tackled properly.

Crypto industry insiders describe the traditional IPO as “a 40-year-old gardening equipment company owner” while an ICO/STO is “an 18-year-old computer geek building his supercomputer in his father’s garage”. There is no valid reason for this to be the case. Many of the traditional financial services companies have steered clear of digital assets due to lack of regulation, although this is changing. Arguably the crop of up-and-coming digital exchanges would appear to be ahead on the technology adoption curve.

We are now seeing many jurisdictions globally pass crypto and tokenisation laws and, against the established exchanges, the narrative of “same business, same rules” will soon come fully into effect. Given that the mainstream markets are already a regulated industry, they should be favourably positioned against any challenger to adopt and implement new technologies in the regulated space – a space where the ‘disruptors’ will certainly struggle. Once the regulatory playing field is levelled, if the mainstream markets sort their technology out, they are ideally placed. With $20 billion raised via ICOs and STOs in 2018, it clearly highlights there is certainly no shortage of investors or firms looking to raise fresh funds.

The dramatic imposition of mandatory remote working as a result of Covid-19 will expose the structural problems more starkly and could well be a catalyst for accelerated development of a genuine end to end digital ecosystem in the public markets as SME’s seek new capital. However, those traditional incumbents will need to adapt and adopt rapidly to a truly digital world or risk becoming extinct.

That said, even the nimbler Fintech firms that are using Blockchain to create Digital Assets are still not delivering a truly digital product and will not be regarded as mainstream until they do. This will become particularly apparent as regulation starts to bite. Blockchain technology is being used to improve the efficiency of Know Your Client (KYC), Anti Money Laundering (AML) checks, trading, settlement and custody services. However, if the securities prospectus drafting to comply with the regulations is still done in the traditional, unstructured way, via uploads of PDF’s, Excel spread sheets or Word files following manual application of regulations and rules, the new digital exchange proposition will be limited and certainly less appealing. Hence the need for the collation of verified structured data, otherwise we do not solve the conundrum of ‘garbage in garbage out’, no matter how slick the technology is.

Why has the SME use of traditional public markets declined?

Over time, accelerated by legislative responses to the global financial crisis, raising funds in public markets for SME’s has gone in reverse as a result of structural inefficiencies, increasing complexity, conflicts of interest, decreasing incentives and breath taking costs.  Current antiquated mechanisms and “one size fits all” regulatory initiatives including MiFID and monitoring communications to identify market abuse (MAR) have made matters worse, driving costs up even further. There has been a shift in focus the towards larger capitalised companies undermining the attractiveness for SMEs to use public markets for debt or equity finance. According to the Federation of European Securities Exchanges (FESE), the cost of an IPO transaction in the mid-1990’s was 2% to 2.5%. By 2015, these costs had risen 10% to 15% for an IPO of less than €6 million, and 6% to 10% for up to €50 million. When added to ever higher ongoing compliance costs, it is unsurprising that funds raised via public markets is half of what it was in the 1990’s. The costs of an IPO and the follow-on governance and compliance costs are real barriers to listing – driven by largely manual processes. No wonder many SME’s and start-ups have sought alternative funding sources and stayed private, often driven into the arms of the Venture Capital and Private Equity funds.

What is being done about the decline?

The problems described here for SME’s that are considering raising equity or debt via the mainstream public markets are obviously now well-recognised. There are numerous initiatives in Europe, such as the EU Growth Prospectus, and ongoing discussions amongst various bodies in the UK, the EU and elsewhere as to what response is best. In Europe, the  FESE itself is now lobbying the European Commission to “Establish a level playing field in requirements applicable to private and public companies, as well as an appropriate level of investor protection which includes a European collective redress mechanism”.

Another initiative worth noting is the European Single Electronic Format (ESEF) which became law in 2019, forcing a process of digitization which, as many have commented, will have a profound effect on companies reporting across Europe. As one ACCA commentator said, “The world’s financial markets are gradually crossing the digital divide and taking listed company annual reports with them”. ESEF means that all listed entities from 2020 will have to file annual reports digitally as inline XBRL filings – allowing not only humans to read them, but also machines. The idea is that the data contained can be used to do much greater analysis and improve business transparency, particularly for investors, pension funds, investment banks etc.

It is important to note that both the EU Growth Prospectus regulations and the ESEF are applicable to both traditional markets and the new digital exchanges.

What has been the progress to date?

While this is all very well, no exchange (traditional nor digital) will truly reap the rewards of lower costs and improved efficiency until the entire process is built on structured data.

The lifecycle of raising equity and debt capital for SME’s in the traditional public markets still has a long way to go before it is, again, truly attractive and can offer a viable option for SME’s to raise funds. The challenge is enormous given the number of organisations involved, the ever-changing rules/regulation (coupled with siloed systems) and an archaic IT infrastructure where computers are unable to communicate with each other. Progress towards digitisation in the traditional equity and bond markets has been slow and none of the stakeholder regulators nor exchanges (even the alternative digital exchanges) are yet offering a truly comprehensive technological approach that tackles the current structural problems head-on while policy and legislation continues to evolve.

So far, digitisation of the listing and ongoing obligations processes in the mainstream markets has focused on discrete elements, such as the shorter prospectus for SME’s and on digitising the financial reporting. While this progress is welcomed, the efforts are granulated and potentially markets’ participants are missing out on the tech advancements that arise from a fully digitalised environment and data processing.

Nasdaq, for instance, prides itself on its technology-based “end-to-end capital raising solutions”. However, even Nasdaq’s “end to end” process does not tackle digitising a large part of the ‘pain’ of an IPO – the documentation process. That process relies heavily on unstructured data and manual processes and is left to the responsibility of the SME in the supply chain. The exchanges and their regulators are still consuming PDF’s, Excel spread sheets and Word files i.e. unstructured data that ends up having to be re-keyed (with inevitable errors) is hard to analyse without significant effort and expense. Even the most advanced AI/NLP search and analysis engines will miss things hidden in PDF’s.

Nasdaq is not alone. Just about every established mainstream exchange and related regulator in the world – Greece, Hungary, France, Cayman, Bermuda, Ireland, UK, Canada, Hong Kong, Australia and South Africa, to name a few – distribute rules, regulations and forms in PDF or Word that a prospective SME issuer typically must pay an intermediary to obtain, analyse and translate into a process which the SME can follow. A few, such as Singapore and the UK FCA, update participants in HTML but there is no direct digital link from the rules to the content being prepared to comply with the rules.

If traditional public securities exchanges and their regulators take a stronger initiative to lower costs and speed up SME issuances, now (to ease the SME issuer burden via use of technology), this sends out encouraging signals to those SME’s looking at fast, cost-effective and efficient ways of raising funds that the mainstream capital markets are no longer the “40-year-old gardener” and have rather been reborn as the “tech savvy leader”!

However, should traditional exchanges, brokers, bankers and their regulators continue with their long lead times for change and fail to take a more innovative approach to technology use, then the field will be left wide open for the new Blockchain-powered Fintech firms to move in and take over. What is more likely is, that while there may be casualties among the existing regulated exchanges (and there will undoubtably be consolidation between the new Blockchain based firms), each camp will likely learn from the other and adopt best technologies and practices. Hopefully, as our lives become more digitised, we will see regulators and markets embrace new technology, enabling capital (whether that be via debt or equity) to become more flexible, efficient, compliant and with less risk. SMEs are going to need new sources and ways to raise the capital with which they need to grow, alongside creating jobs that are desperately needed.